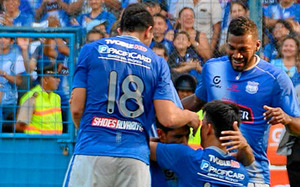 Emelec’s approach is unstoppable after defeating Deportivo Quito 3-0 yesterday in Capwell Stadium, which holds the lead and the possibility of being champion 2013 without playing the final, after winning the first stage.

The goal of achieving the title was strenghtened when Universidad Catolica, tied with Liga of Loja, and Independiente lost 2-0 to Macara a team already relegated to the B series. Both teams aspired to be first, but failed at this date and now have run out of chances to finish before the four dates of the second stage.

Emelec now has 37 points, followed by Catolica with 32 and Independiente with 31. The blue team will visit the Valley in Sangolqui the next date and that could be a key game for the championship, to take the victory. As for Independiente, they would have the last chance to stay in contention for the top spot.

Yesterday, despite the millionaires had a sharp offensive start, while Quito was the one who put the first dangerous actioner. During the first 7 minutes, Federico Nieto started a counterattack after passing the ball to Alex Colon, who shook the goal area defended by Cristian Arana with a strong kick.

But those fired by Gustavo Quinteros completely settled its domain and opened the scoring in the 15m through a head goal made by the Paraguayan player, Fernando Gimenez, who anticipated the goalkeeper Fabian Carini after a corner kick taken by Marcos Mondaini.

Gimenez doubled the lead in minute 23 with a diagonal shot after powerful kick from Enner Valencia, who collaborated with the third goal after the minute 52, thanks to an incursion kickback and passing the ball to Fernando Gaibor to add another goal.

The other results were: Barcelona 1 Nacional 0; Cuenca 1 Manta 1, and Liga de Quito 3 Quevedo 1.

In addition to the championship, the teams dispute the classification for Copa Libertadores and Sudamericana, and not the descent into the B series.