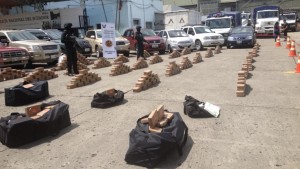 Twelve Ecuadorians and one Peruvian, and the above 333 million dollar seizure, ten luxury cars and 1,2 of drugs, was the result from the the “Emperador” operative.

The operative was executed this past Thursday in Guayaquil, Durán, Daule, where six houses were braked-in.

“The structure had Guayaquil as its operation center, that was dedicated to send considerable amounts of cocaine thorugh the Maritime Port”, informed Freddy Ramos, National Director of Counternarcotics.

The alkaloid was camouflaged in the refrigeration pipelines of the containers, or in baggage, prior to the manipulation of the security seals.

The inquiry took three months to identify and locate the organization, with national and international links, according to the authorities. It is presumed that the main destiny of the drug was North America.

A little optimism for the construction of port

The toxic legacy of the gold rush