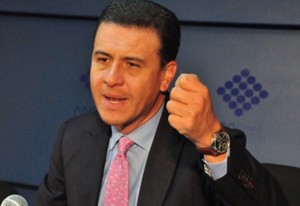 Following the announcement of Ecuador to lift the safeguard measures or tariffs imposed on Colombian and Peruvian products since last January 5, entrepreneurs from the three countries expressed satisfaction with the decision.

In a joint press conference they congratulated the Government of Ecuador. “We appreciate there is the recognition of the government of Rafael Correa about this was a mistake and hopefully this will never be repeated and serve as a lesson to keep serious foreign trade policies,” said Blasco Peñaherrera, president of the Chamber of Commerce of Quito .

Harol Delgado, representative of Colombia, meanwhile, expressed his “satisfaction” by the news received through the media in his country. They expect “it is officially this way.”

While Jorge Vonwedemeyer, of Peru, ratified what has been said by Peñaherrera. “We congratulate and welcome (the decision) because somehow we see the recognition of an error and when it is an error it can be corrected,” said the executive.

In the press conference the entrepreneurs also showed the consensus document called Declaration of Commercial Andean Unit,they signed in conjunction. That resolution provided seven points, among which was the “urgent need to find solutions that avoid future conflicts of the multilateral relations.”

Finally, in a slight assessment, Peñaherrera said that during the month of tariff measures the most affected sectors were the pharmaceutical and automotive. The first “almost collapsed.”