Environment Minister is pessimistic opposite outcome at climate summit 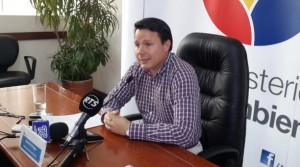 Daniel Ortega, Minister of Environment, viewed with skepticism the framework Convention on climate change, adopted on Saturday in Paris.

He arrived yesterday morning to Ecuador. He had a meeting, attended by children and young people, and appeared before the press at noon. He spoke for 16 minutes. He answered three questions. It had the full agenda, justified.

He mentions that one of his questions is that the document is not yet binding. To make it binding, it must be ratified by 50 countries and these must represent more than 50% of global emissions. And the background are not very flattering.

About Ecuador, Ortega said, the document will be ratify as soon as possible. It is a procedure that corresponds to the Assembly.

The second doubt: financing. “The agreement lacks completely of clarity in the economic and technological resources,” said the Minister.

In Paris established as objective mobilise $100,000 million by 2025. According to Ortega, so far only has mobilized 10% and three billion dollars are needed to implement the actions of reduction.

His third question is the global goal to stabilize temperatures by 1.5 degrees of increase. But the commitments made by the participating countries lead to an increase of three degrees.

While in Ecuador he highlighted as positive the local developments. He mentioned that, at the end of 2016, 93% of the energy will come from renewable sources; the conservation of forests and protected areas. In the future, the Government will review the plan and national strategy – which includes the private sector – and “we will be vigilant,” warned, that the agreements will be met.