Equality Councils are not yet integrated 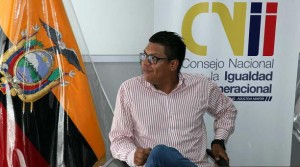 On March 17 President Rafael Correa signed the Decree 967, through which Carlos Munoz, was appointed president, and Tamara Merizalde, alternate president of the National Council of Intergenerational Equality (CNII).

Carlos Munoz, 27, is currently undergoing the certification process at the Law School of the Central University. There, he chaired the Federation of University Students of Ecuador (FEUE) on behalf of the New University, a movement identified as close to the government.

The document also sent Rodrigo Collahuazo and Juan Rodriguez to the Nationalities and Peoples council; Xavier Torres and Congresswoman Maria Soledad Vela were sent to the Disability Council; and Hernan Astudillo and Leonardo Ortiz, to Human Mobility, as presidents and alternates respectively. In the fifth council, of Gender Equality, there was no change of authorities; Yina Quevedo continues on the front.

These agencies are responsible for monitoring social rights in each area and replace former structures (CONAMU, Conadis, Council for Children and Adolescents, CODEMPE, among others).