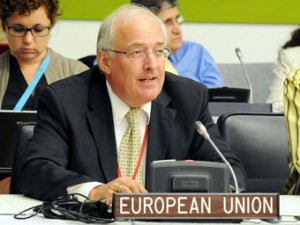 Peter Schwaiger, member of the European Union in Ecuador, clarifies information published in the Spanish newspaper El Diario, which refers that European officials  would have threatened to remove to Ecuador from the General System of Preferences and the General System of Plus Preferences (GSP), which allows that the majority of exportable domestic goods enter to the block without paying taxes.

Schawaiger indicated that he saw the title of the published note (“The EU threatened Ecuador to remove development aids if it did not accept free trade), to which he considers as totally out of place.

“First we are not threatening to anyone and also, in this context, I understand that the note refers to conversations between 2011 and 2012. In that time we had established a cooperation program for the entire period from 2007 to 2014. Then, the upper-middle income countries would leave the bilateral cooperation and of concentrating our aid on the poorest countries. It was nothing particular to Ecuador or against Ecuador, nor a weapon against Ecuador. “