The delegation of the European Union (EU) in Ecuador and the Ministry of Foreign Affairs presented this Tuesday, September 13, a new emergency program to strengthen the Ecuadorian prison system, mired in a crisis since 2020 that has accumulated more than 400 murders in its prisons. 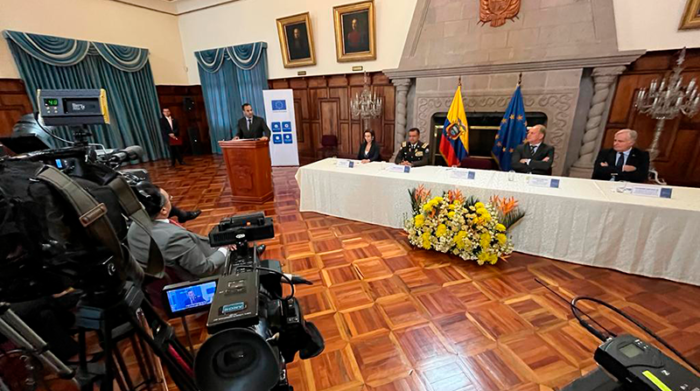 The Ecuadorian Foreign Ministry recalled that this cooperation program arose after the conversations held by both parties in the so-called ‘First Technical Security Table’.

The programme, which is a response from the EU to a request made by the Government to deal with the prison crisis, includes a donation of 2.5 million euros (USD 2.49 million) aimed at the implementation of strategies to deal with the acute prison problems facing the South American country.

The plan will have a duration of 18 months and will finance activities related to institutional strengthening, prison management protocols, provision of technology and training for prison officials in combating inmate riots.

During the initiative’s launch ceremony, Ecuador’s Foreign Minister, Juan Carlos Holguín, assured that the battle against criminal structures, violence and insecurity inside and outside prisons requires the support of the international community.

These battles “we have to address not only from the government but, precisely, from a joint effort between state institutions and international organizations,” said Holguín.

On his side, the ambassador of the European Union in Ecuador, Charles-Michel Geurts, expressed his satisfaction at collaborating with Ecuador through this type of cooperation program.

The Ecuadorian Foreign Ministry recalled that this cooperation program arose after the conversations held by both parties at the so-called ‘First Technical Security Table’, in November 2021, when the Government of Guillermo Lasso required support to face the prison crisis that still persists in the country.

Said plan will be articulated to the Assistance Program against Transnational Organized Crime (PAcCTO) that already operates in Ecuador.

The director of the National Service for Comprehensive Attention to Persons Deprived of Liberty (SNAI), Pablo Ramírez, assured that this penitentiary unit is carrying out “an integral process with trained personnel, state-of-the-art technology, actions with a human and social sense, a transformation that pull through in a very strong storm.

In addition, the Foreign Ministry assured that the implementation of the program reflects “the firm commitment of both parties to combat organized transnational crime in all its forms and with strict respect for human rights.”

Ecuador presented the ‘Open for Business’ in China