Former President Rafael Correa, his intelligence chief, Pablo Romero , his chancellor Ricardo Patiño and ex-comptroller Carlos Pólit have a group of jurists who are responsible, for example, for stopping requests for red dissemination before the International Police (Interpol). 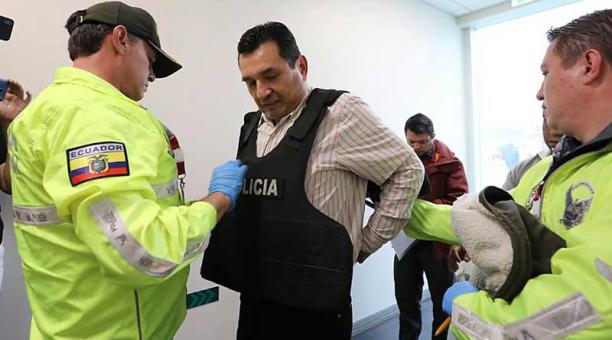 In the case of Correa and Romero one of his lawyers in Europe is Christophe Marchand.

Its office is in Brussels-Belgium, but it is also accredited by the Lyon Bar Association in France .

In the latter city is the headquarters of the General Secretariat of Interpol , where requests for red notification are resolved, a legal figure used to locate and capture people requested in extradition .

According to documentation that is now in the Prosecutor’s Office , on June 17, 2019, Romero contacted Jehosheba Bennett, a lawyer at the Marchand law firm. The matter they dealt with was about the drafting of a request that would be sent to the Interpol Secretariat, so that it could revoke the red alert, which since 2018 had been in force against the former official .

In those conversations, Bennett allegedly tells the former intelligence chief that they are late for the process , but that the request could still be sent in August (2019). Romero and Correa are prosecuted in Ecuador for the kidnapping of political activist Fernando Balda. The first was extradited from Spain on February 21 last.

This newspaper contacted Bennett, but the lawyer preferred not to comment on the emails, which were released by Balda, earlier this month.

Marchand, who has also defended the founder of WikiLeaks , Julián Assange , and the Catalan independence politician Carles Puigdemont, was in Ecuador in 2018. He then said that he was part of a group of “international observers”, whose objective was to monitor that comply with due process in the Balda case.

Other jurists who have collaborated in the defense of Correa and Romero in Europe are Ludovic Hennebel, in France, Oswaldo Ruiz, in Hungary, and Enrique Santiago Romero, in Spain. In their cases, their interventions have been “more political”, punctual and free, because “it is one more subject of friends,” said a person close to Correa.

The investigations that are in the Office of the Prosecutor show that in September 2018, for example, Hennebel went to the UN Special Rapporteurship on judicial independence. There he denounced that the process against the former president, in the Balda case, “systematically violates the rules of a fair trial.”

On July 23, 2018, on his Twitter account he also published: “Quito today confirms the arrest warrant against President Correa , in violation of human rights and the right to defense. New instrumentalization of justice for political purposes ”.

Ruiz is another academic and lawyer who has defended Correa, Romero and Ricardo Patiño. Last February 13, he would have traveled to Geneva, Switzerland, to denounce “the political persecution” against former Correista officials.

Fernando Yávar, defender of Patiño in Ecuador, indicated that the former foreign minister has sought lawyers abroad, although he said he did not know which law firm it is. He added that his work, so that the international arrest warrant against the former foreign minister was not issued, was only when he prepared a summary of the case and delivered these papers to Patiño’s relatives. In Ecuador, the ex-official is being prosecuted at instigation, after having delivered a speech calling for mobilization against the current government.

Other former officials who have managed to prevent Interpol from ordering his location and capture are former Comptroller Pólit, sentenced in the Odebrecht case, and former Minister Vinicio Alvarado . The latter is processed in the Bribery file.

His lawyer, Vanessa Zavala, said that in his case no foreign lawyers were hired, but that the resolution of the agency in favor of Alvarado was issued, because the request “had errors of substance and of form.”

In his case, Interpol indicated that it could not give way to the alert , since it considered that the request responded to “political issues”, which violated article 3 of its Statute, which refers to the “neutral” role of the organization.

The same argument about motivation with a political background was quoted in the case of Pólit, who is now in the United States.

Cases like Odebrecht’s gave way to legal proceedings against authorities from the previous government. This included then Comptroller Carlos Pólit. Fernando Tamayo, his lawyer, said that Interpol has already deleted the data from the files.