Extinction of penalty for Cléver Jiménez will be requested 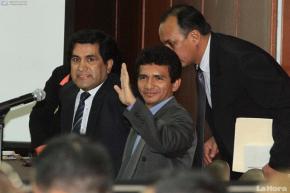 Julio César Sarango, lawyer of former assemblyman Cléver Jiménez, his  former advisor Fernando Villavicencio and activist Carlos Figueroa (convicted for insulting the President), will request today the extinction of the penalty in the National Court of Justice (CNJ).

Sarango noted that with the amendment of the Integral Criminal Code, effective since yesterday, the criminal proceedings would be left ineffective for the removal of the article with which it started.

The defense says that the defendants were applied Article 494 of the former Criminal Code, which states that they will be punished with imprisonment of three months to three years, the ones who have proposed a indictment, or made allegations, which have not been tested during the trial.

“Today the criminal type changes because the offense does not say that the complaint must be proven at trial. The Integral Criminal Code supersedes the acted. It should extinguish the offense, suspend the execution of the sentence and the order of incarceration. Figueroa should have been free immediately”, said Sarango.

Gustavo Jalkh, President of the Judiciary Council stated: “Article 670 states that there must be a public hearing and contradictory in presence of the Attorney, the Public Defender to analyze the benefit that someone could receive with the Comprehensive Organic Criminal Code. It is not an automatic release, but it analyzes this benefit when there is a punishable offense carrying a lesser penalty”, said the official.