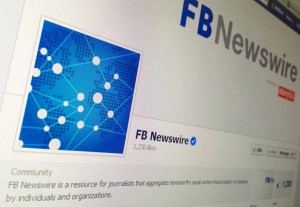 Facebook has created on today a new tool designed especially for journalists, as part of a broader effort to become the place par excellence where they meet to discuss its 1000 million users.

Under the name of FB Newswire, the tool is designed to help journalists to share and integrate Facebook news content that is posted by members, such as photos, status updates and videos.

Facebook has partnered with Storyful, of News Corp, the media tool that verifies and manages the copyright of news and videos on social networking platforms like Twitter.

`The news are having wider audience on Facebook than ever before, and journalists and media organizations have become an integral part of Facebook,´ wrote Andy Mitchell, Director of News and Societies of Global Media in Facebook, through a blog post in which he announced the creation of FB Newswire.

Ukraine will respond if there is an invasion of Russia