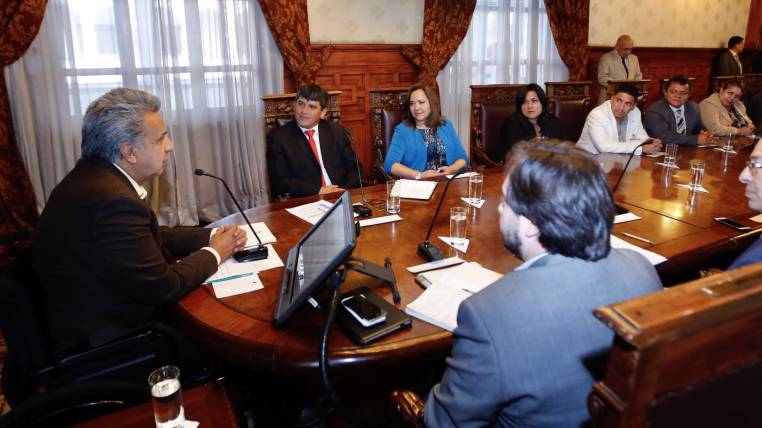 Without any visible progress today the deadline that President Lenin Moreno gave to Walter Patricio Arizala, alias Guacho, to be delivered to the authorities is met. He is accused of responsibility for the attacks, kidnappings and murders that occurred on the northern border since January.

The failure of the presidential warning leaves the victims of terrorism in the same uncertainty. Two Ecuadorians, Óscar Villacís and Katty Velasco, remain kidnapped by the group, made up of FARC dissidents, and the government has no news of them. The bodies of Javier Ortega, Paul Rivas and Efrén Segarra, workers of El Comercio newspaper, have not yet been recovered.

At that point, alias Guacho (for whom a reward of 230,000 dollars is offered) managed to put the governments of Ecuador and Colombia on the ropes. The first has opted for an uncomfortable silence. The second acknowledged yesterday that they are not sure if the kidnapped are in Colombian territory and that they have not been able to find the bodies.

The Ecuadorian government, in political-administrative terms, does not get well after the 10-day deadline without results. The future of the three people who led the military and diplomatic offensive against terrorists is at stake.

“The president will make the best decisions. It will put the right people to start a process, both to face what we are living, and to investigate what has happened, “said yesterday on a television channel Andrés Michelena, Secretary of Communication.

A statement that sowed more doubts about the permanence of César Navas at the head of the Ministry of the Interior, of Patricio Zambrano in Defense and of María Fernanda Espinosa in Foreign Relations. All of them, on different occasions, have reiterated that their positions are available to the chief executive.

The signs of distrust of the President of the Republic in his military and police command are not new. At the beginning of April, for example, he formed a Council of External Advisors composed of Euclides Mantilla, former general of the Police; Paco Moncayo, former chief of the Joint Command; and Fabián Varela, former commander of the Army.

Although on Tuesday afternoon Espinosa stepped aside. “The capture of Guacho corresponds to the security front. We do the work we must do and the ministers of that front are the ones who have to take care of the capture of the criminals, “he said.

Following the logic of Michelena, were they the right people to face the terrorist threat? His management, at least, leaves some questions unanswered.

One of them and that has generated the claim of the relatives and friends of the journalistic team of El Comercio, is the declassification of all the documents related to the failed strategy that was executed to free them. The president ordered, 14 days ago, that all the information be made public. For that, Navas had to sign a ministerial agreement. That order has not been fulfilled until now.

The management of the two kidnappings (of the journalists, as well as of the citizens of Santo Domingo de los Tsáchilas) also has gaps. The governments of the two countries have no certainty about the place of the events, whether or not there was negotiation in the first case, or whether the offensive operations in the area were stopped or not.

The ministers, whether or not they remain in their positions as of today, will also have to give explanations to the Assembly. The legislators respected the term of 10 days that Moreno had indicated to obtain concrete results, but approved his appearance before the Plenary.

The Truth Commission, without progress

The relatives of the El Comercio newspaper team live their own drama. Ricardo Rivas, Paul’s brother, regretted yesterday that there was no news. He recalled that eight days ago they had a meeting with government representatives to analyze their request for a commission to investigate the case. There are no advances.

Also, the Red Cross, the UN, the OAS and journalists’ forums around the world have offered their help to recover the bodies, but the connection with alias Guacho, dissident of the FARC to whom the kidnapping is attributed and has been broken.

16 journalists murdered in the region

The IFEX-ALC network, which brings together press associations in Latin America and the Caribbean, reported that 16 journalists have been killed in the region so far this year. The organizations made an urgent call to the States to “implement effective protection measures and eliminate impunity for cases of violence that affect journalists in the region.” The organization perceives these murders as “a growing trend in the region” and urges the States “to adopt measures to protect their physical integrity”. (I)

Cocoa and its derivatives also enter the kitchen, according to Daniel Ampuero