Failure of the Criminal Chamber has “constitutional crimes” in Zamora´s absolved judgment, according to Attorney 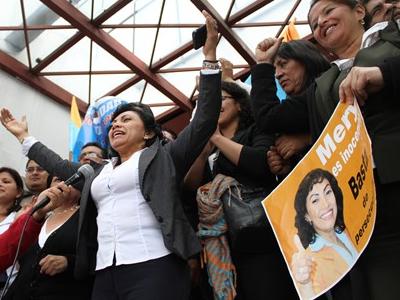 According to Galo Chiriboga, Attorney General, the acquitted failure of Mery Zamora, Former President of the UNE, has “constitutional crimes” in the resolution of the Criminal Chamber of the National Court of Justice (CNJ). In the judgment of the crime she was  accused of sabotage and terrorism that would have been committed on September 30, 2010.

“The prosecution is not seeking eight years of sentence for anyone. We want legal clarity. If the Constitutional Court (CC) considers that there is an infringement and that the sentence is excessive … in good time; if the sentence says it is correct, in good time,”Chiriboga said it when explaining the extraordinary protection action brought before the Constitutional Court (CC) to challenge the judgment against Zamora.

“President (Rafael Correa) argues that there must be a complaint, the Prosecution considers that the legal path is the decision of the CC,” said the Prosecutor.

While Zamora´s defense said that a lawsuit will be filed in the coming days against the Ecuadorian State to the Inter-American Commission on Human Rights (IACHR).