Families analyze what to do with files about plagiarism and crime 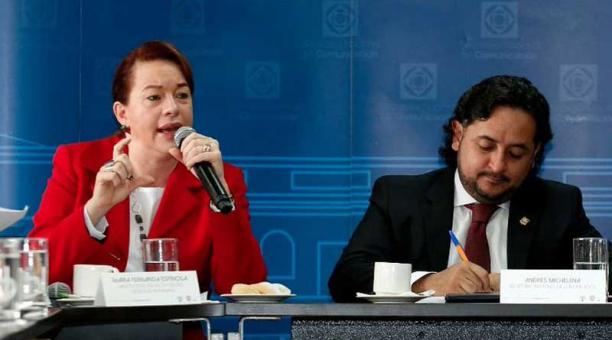 The relatives of journalist Javier Ortega, photographer Paúl Rivas and driver Efraín Segarra analyze how they will handle the information of the kidnapping and murder of the team, once it is declassified.

The relatives have not yet decided if they will make it public, if they will exhibit a part or they will definitely keep it in reserve. What is clear is that they will first review the files. “Let’s see if everything is complete or something is missing. Then we will decide what to do “, said this Thursday, May 10, 2018, Ricardo Rivas, spokesman of the three families.

Hours before, the Government announced that next Monday 14 will deliver the reserved files on the plagiarism and murder of the workers of EL COMERCIO, at the hands of the self-named Óliver Sinisterra Front.

The case files include the logs of the Police and the Armed Forces. In addition, they will provide informative reports, executive reports and reports on communications with the group of captors. The three professionals were kidnapped on March 26, in the border town of Mataje; Confirmation of their death occurred on April 13.

The declassified information will cover the investigative actions that were made during that period. The announcement on the delivery of the information was made by Foreign Minister María Fernanda Espinosa, together with the Secretary of Communication, Andrés Michelena, and the Secretary of the President, Juan Sebastián Roldán.

Espinosa said that the purpose of lifting the sigil responds to the request that the families made to President Lenin Moreno. The relatives also decided to create an international commission to investigate the incident.

According to Espinosa, that commission will be implemented via Executive Decree and requests have been made to be led by the Inter-American Commission on Human Rights (CIDH). The counterpart on the Ecuador side will be in charge of the Ministry of Justice. Rivas said that although it is painful to know the details of the case, this will be the only way to get to the truth.

“We have to overcome to know what happened, know what was done and what was left to do.”

For those close to them there are questions that still have no answers: Why did they kill them? What happened in those first hours of the kidnapping? “We have to know what happened,” he insisted.

Roldán explained that from Monday, May 14, 2018, once the delivery of the files is completed, the relatives will be responsible for the use they give. “It will be family members who decide how to handle that information. When we deliver it, we will stop being the custodians, “he said.

The first time we spoke about the release of the information was on April 17, after a meeting Moreno held with the Public Safety Council of the State (Cosepe). The idea of the President is that “the Ecuadorian people know the efforts of the State to guarantee the lives of our compatriots.”

At that meeting, the kidnapping of Óscar Villacís and his girlfriend Katty Vanessa Velasco, on the northern border, about whom there is currently no information, was also analyzed for the first time. This Thursday, this body met for the fourth time this year.

Ten senior state officials attended the meeting. Among these the vice president María Alejandra Vicuña. At the end, Andrés Mideros, Secretary General of the Presidency, reported that the Ministers of the Interior and Defense presented the new national security and defense policy. It was decided, for example, to employ a Joint Task Force, reinforced by a group of Special Forces.

It will be in charge of a general. In addition, the personnel of elite police groups will be redistributed, such as the GOE, GIR and the GEMA anti-drug service; integrated controls will be reactivated and fluvial patrols will be expanded. But education, health and production services will also be strengthened, economic incentives will be created for commercial and productive activity in the area and the cantonal capitals will be strengthened.

The Government has recognized that the problems on the northern border are the trafficking of drugs, weapons, explosives, chemical precursors and contraband. Since last January, in the cantons of San Lorenzo and Eloy Alfaro, of Esmeraldas, there has been a state of exception. (I)