The burial of Jorge Mejía Vera was quick. There were no flowers or serenade or mass . The small chest, which contained his remains, went directly from the crematorium to a niche in the Guayaquil General Cemetery . Her son Eddy says she could barely say goodbye to her 50-year-old father. He hoped to offer a mass one month after his death . Today is the deadline, but the tribute will have to wait longer. 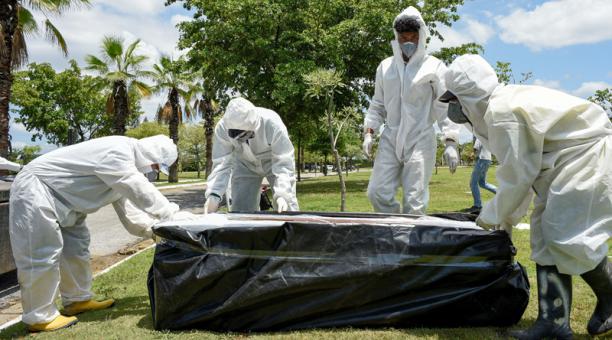 The young man still remembers the day his father died at home. “It was March 23 when my dad stopped breathing. He had all the symptoms of the virus. We called the police but they told us that we had to wait because there were more deaths in the city, ”he says.

At first, he and his family did not understand why they took so long to remove the body, but over time they saw that they were not the only ones who lost a loved one at that time. His father was removed after nine hours and three days passed to bury him .

Starting Monday, March 23, families began to report the delay in the removal of bodies in Guayaquil. But that weekend, deaths have already been reported in homes. The funeral system collapsed. Families held the bodies of their loved ones for up to seven days inside the homes. That led to being taken out on the sidewalks to avoid an infectious focus in the house.

On the night of March 23, the special security zone in Guayas was also activated to deal with the pandemic in the province. 3,300 military and police officers were deployed to carry out controls. A group of this contingent also collaborated in the body-lifting tasks.

On April 2, Sebastián Roldán , secretary of the Presidency, recognized that “one of the strong peaks in Guayaquil was between March 17 and 20, with more people in emergencies.”

Civil Registry (RC) statistics reflected an increase in deaths since March. That month there were 4 236 deaths , while between April 1 and 20 there were 7,361 deaths. The two reports surpassed the province’s average of 2,000 monthly deaths last year.

A month later, the reality in Guayaquil is different. The Task Force that President Lenín Moreno activated reduced the times in the uprisings. Now, people who die at home are removed in less than six hours. However, the problems surrounding the deceased have not disappeared . The drama of the families continues, but now it is lived outside the hospital morgues .

Until yesterday, April 22, 2020, people claimed the bodies of their relatives. Narcisa Alvarado has spent 20 days looking for her mother’s remains at the Guasmo Sur hospital . Her mother died there on March 30. “We have been out of the morgue every day. We have not eaten, we have endured sun, rain and nothing that they give me to my mother, ”he said yesterday.

Another aspect that generates anguish is not knowing with certainty the cause of death of your loved ones. Narcisa says that in her mother’s death certificate she says it was because of covid-19 . But she doesn’t understand how the doctors came to that conclusion if they never tested her. Eddy also has a similar question. In his case, coroners told him that his father died of respiratory arrest, but he believes he had coronavirus .

The health emergency in the country generated changes in the processes to record deaths. Authorities of the Ministry of Health have indicated that the ‘verbal autopsy’ was implemented. This process consists of an interview with the victim’s relatives and depending on the symptoms he had, the cause of the death can be presumed.

The national director of the RC, Vicente Taiano , told this newspaper that among the main causes of death that he has observed in the reports from March and April are covid-19, alleged covid-19, natural deaths and respiratory diseases. Another fact is the decrease in the number of daily deaths in April in Guayas.

The vicedefensora of the people in the province, Zaida Rovira , said that he had committed a series of violations of human rights against the families of the deceased. Among the most serious are the lack of medical attention, the delay in the removal of bodies, the suitable identification in the morgues and the lack of information on the final destination of the bodies of their relatives.

Jorge Wated , in charge of the Task Force , said that families do have access to the location of the graves . The Government has already carried out more than 1,000 burials.