FARC promotes dialogue between the Colombian government and ELN 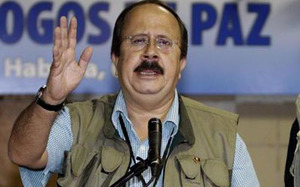 Although the FARC guerrilla group continues to negotiate the peace with the Colombian government in La Habana (Cuba), it also spoke last Monday in Bogota to suggest talks between the rebel National Liberation Army (ELN) and the government.

“We want official negotiations with the ELN to be carried out,” said Andres Paris, one of the peace delegates of the FARC during his statements to the Cuban news agency Prensa Latina.

Paris added “both organizations (communist guerrillas) have the same vision on the political settlement, they do not see it as surrender or a weapons submission, but as a necessary transformation for Colombia that would involve social and economic changes.”

Following the statements of Paris, both guerrillas issued statements in Colombia, where the government indicated its intentions of Juan Manuel Santos to realize the vision of peace negotiations. “The two forces are working to achieve full peace talks, which is not easy against a deeply reactionary government,” said the different statements, signed by the FARC chief Timoleon Jimenez, and the leader of the ELN.

Lindsay Hamon is touring the world with a cross on