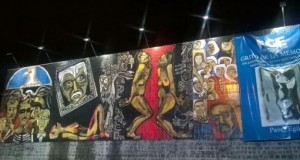 His grandson noted that the views in this regard expressed by Elsie Monge, former member of the Truth Commission, constitute a violation of human rights of the former President.

Monge told to El Universo newspaper last Monday, that the mural “recovers the historical memory of the sad events that occurred during the Febres-Cordero government,” which for Attorney Leon Bjarner Febres-Cordero constitutes “a defense of the subversive group that has achieved that this `art´ is placed at the General Attorney´s Office, an institution that must forewarn the due process and fundamental rights of all citizens of Ecuador.”

Bjarner Febres-Cordero argues that the former President Leon Febres-Cordero had never been accused, charged or processed by alleged acts of repression.

Cesar Monje, in judicial process due to libel against Jimmy Jairala