FEF president cooperates with US Prosecution 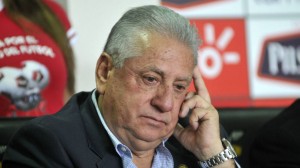 The president of the Ecuadorian Soccer Federation (FEF for its Spanish acronym) Luis Chiriboga Acosta spoke with reporters and that since Thursday afternoon had concentrated outside his house, to take a statement from him, after the United States Attorney’s Office included him in a list of South American executives linked to alleged cases of corruption.

“From the beginning (of the scandal called FIFAGate) we asked the Attorney General of Ecuador to collaborate with the investigation and I ratify this today. Therefore I want to tell you I will not renounce the Ecuadorian Soccer Federation and from my role I will cooperate in everything with the Prosecution and with the United States through it,” he told reporters.

Chiriboga added: “I want to say that we will continue with our functions and we ratify our support with all investigations.”

He took no questions and following a one minute statement, he re-entered to his house.

Meanwhile, the lawyer for the FEF head, Lucia Vallecilla, said Thursday that in the event of his arrest, the manager will exercise his right to house arrest because of his age (69 years old).

“Mr. Chiriboga can leave the country whenever he wants. The case is right now in a stage of investigation,” the lawyer said in an interview with La Red.