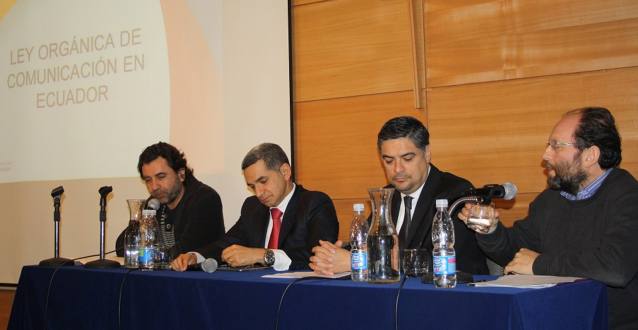 During the `II Conference of Freedom of Expression and Media Law’ of the Pontifical Catholic University of Valparaiso (PUCV) in Chile, the Secretary of Communication of the Presidency Fernando Alvarado, shared the “experiences” that some officials lived with “the mediatic power” and that awoke this “fight” against that ” undergrowth,” he said, in addition to show in favor of the Communications Act.

He related his experiences to students, teachers, journalists (of some countries of the region), and four of the five members of the Communications Regulation Council (Cordicom).

Alvarado recalled his childhood in Quevedo (Los Ríos), when his father owned some media, to which he said, allowed him to understand “the chieftainship of journalists in Ecuador.” He also quoted part of his private work history, which claimed to have learned “the dynamics of the media.”

He said that when he began to collaborate with President Rafael Correa, he anticipated that the media in the country was “like undergrowth”. And said: “You have two options to interact with the media: being an efficient, tenacious and constant gardener to maintain pruned theundergrowth or leaving a space and negotiate with them.”

The President replied, according to Alvarado: “I want to be the gardener until the last days of my government.”