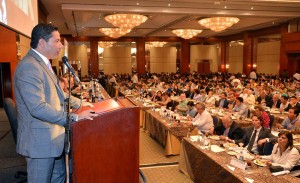 “Free expression does not belong to television, to Bonil, to El Universo newspaper, it does not belong to CNN,” said Fernando del Rincon, Mexican journalist and host of CNN during his speech at the congress of the Inter-American Business Federation (FIE for its Spanish acronym), held in Guayaquil.

The reporter called upon the civil society to defend freedom of expression in Ecuador as a way to defend its democracy, and prevent that free expression in this country resembles to that of Venezuela.

He warned that if there is no freedom of expression in a country, that level of censorship can be reached. “It’s a practice that has to do with power, control over it, the fact of not being questioned,” he said.