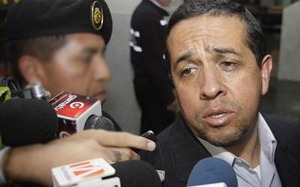 The legal advocates of the Major (of passive service) Fidel Araujo, who was convicted for the crime of incitement to rebellion of the security forces, expect the notification of the judgment to appeal the ruling.

The attornet of the former military, Reinaldo Zambrano, said yesterday that the law gives four days so that the Fifth Court of Criminal delivers in writing the reasons for the sentence and years in prison. “But experience tells us that they can take longer, about a fortnight or more. Meanwhile, we cannot appeal any action,” stated Zambrano.

By the time the precautionary measures of prohibition to leave the country continue in force along with the obligation to report every week before a court for Araujo.

When the Court’s decision was announced last Wednesday, the former military of Sociedad Patriotica indicated that the process will continue elsewhere. “If the injustice determines that I should go to jail, I’ll go to jail.”