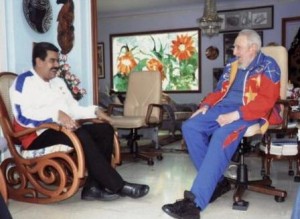 Cuban leader Fidel Castro announced yesterday that he received the visit of Venezuelan President Nicolas Maduro on Tuesday in Havana and congratulated him for his “solidarity” with the Palestinian people.

Maduro’s surprise trip to the island was not officially announced neither in Havana or Caracas.

“Yesterday I received the visit of the President of the Bolivarian Republic of Venezuela, who made a trip abroad related to the defense of major oil interests of his country,” Castro said in his paper entitled “True friendship”, reported by the local media.

A few hours ago, the Venezuelan government announced in a statement the arrival of a plane to Gaza loaded with 12 tons of humanitarian aid.

“I congratulated Maduro for his extraordinary solidarity with the heroic people of the Gaza Strip,” said Castro, referring to the humanitarian aid sent by Venezuela to the Palestinians.