Seventeen banana exporting companies will be notified of alleged irregularities detected by the Ministry of Agriculture and Livestock (MAG) within the audit that was carried out on a total of 56 of these businesses to verify that the official price of the box of bananas is paid , whose minimum support price is $6.25. 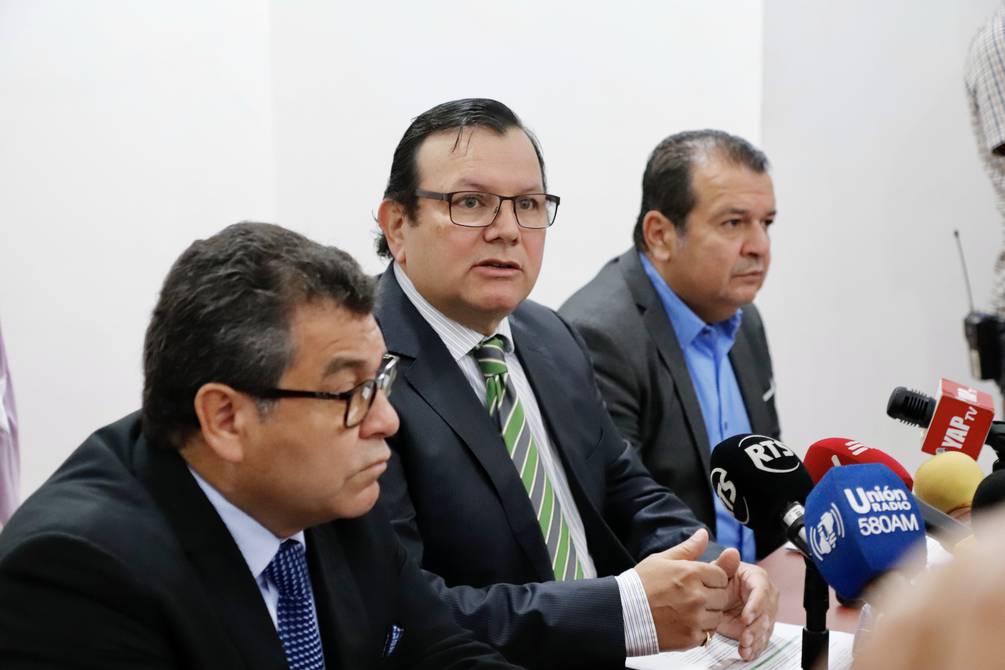 Bernardo Manzano (c), Minister of Agriculture and Livestock, assured that the audits will be carried out on 260 companies and associations linked to this activity.

Minister Bernardo Manzano was in charge of detailing the alleged irregularities in which these companies incurred and for which they may possibly be sanctioned. He indicated that in total this process will be carried out on 260 companies and associations linked to this activity.

“The companies that I just mentioned are already being reported with the opening of administrative files so that they can be notified, some have already been notified, others will be notified during the course of today,” assured Manzano, who clarified that the procedure will be followed. due process, so that all companies have the right to present their defenses

He added that once this due process is completed and the responsibility of these companies for the irregularities found is determined, if applicable, economic sanctions will first be imposed, then suspension of exports for 15, 30 and 60 days until the closure. definitive.

Regarding the situation of the banana producing sector, which in the province of El Oro indicated that they continue with de facto measures due to the alleged neglect on the part of the Government, Manzano recalled that there were several requests from producers at the national level and to which the president of the Republic, Guillermo Lasso, has agreed.

The Secretary of State assured that he has met with the president of the National Federation of Banana Producers (Fenabe), Franklin Torres, with whom he discussed point by point the requirements of the sector.

“They asked us to change Presidential Decree 183, they changed it, they eliminated it, the one on the issue of new plantings. It was requested that Decree 1127 be modified, the president also agreed and we changed it to a single qualification for the packing plants, to avoid double qualification and abuse by some exporters,” compiled Manzano, who announced that a advisory council to review Ministerial Agreement 057, to analyze the problem of the banana chain and the FOB price, which will be carried out jointly with the entire industry.

He added that the MAG is paying subsidies to small producers for the issue of black sigatoka, in addition to the Urea Plan and the Seed Plan, which also benefit this sector.

Specifically regarding economic aid, Manzano clarified that about 250 producers have benefited, although he acknowledged that there was some delay due to the strike, but assured that they have been resumed since last Monday.

“They have been complying with all the points and in these points about the official price I want to remind them that when I just arrived it was $1.80, today they are paying $5.50 and $6, it is not the ideal but we will continue to push with the actions we are doing at this time,” said Manzano, who assured that “the ball is in their court” and they have to inform the MAG who their representatives will be for the advisory council.

As for other products, such as corn, Minister Manzano assured that the national harvest will be absorbed and then allow imports with which the deficit of the grass can be covered. “The price that is being paid in the market right now is between $20 and $21 (per quintal), higher than the price that had been given by decree ($15.57),” said the official, who assured that the increase in cost is a problem worldwide and added: “The issue is that it does not rise to $24, $25 or $26 for some kind of speculation.”

Meanwhile, Manzano, after assuring that he is ratified in his position, revealed that a plan is being developed, which will be presented to President Guillermo Lasso, to work with peasant family farming, with a focus on the commercial part.

“The commercial part is key, agriculture has to be profitable for small farmers,” explained the minister, who added that they are also working with the National Public Procurement Service (Sercop) to open a catalog of peasant family farming, to that small farmers can sell fresh fruits, milk and other products to the State.

In addition, he announced that talks are being held with self-service chains such as Almacenes Tía, Supermaxi (Favorite Corporation) and others, to generate spaces on hangers for peasant family farming. “And in this way we can further unite the small producer of the field with the consumer,” said Manzano, who added that work is being done to open, for this sector, the credits of the first $60 million at 1% interest over a 30-year term. , in addition to another $40 million for larger loans, up to $25,000, at 5%.

“We are working on it at this time to inject all these programs as quickly as possible, so that people stay in the field and feel cared for,” he concluded. (YO)