First well of the Ishpingo field adds to Ecuador’s oil production with 3,600 barrels per day

The Government opened this Wednesday, April 13, 2022, the valve of well A5 -on the platform of the Ishpingo field- and from which a production of 3,600 barrels of oil per day is expected. 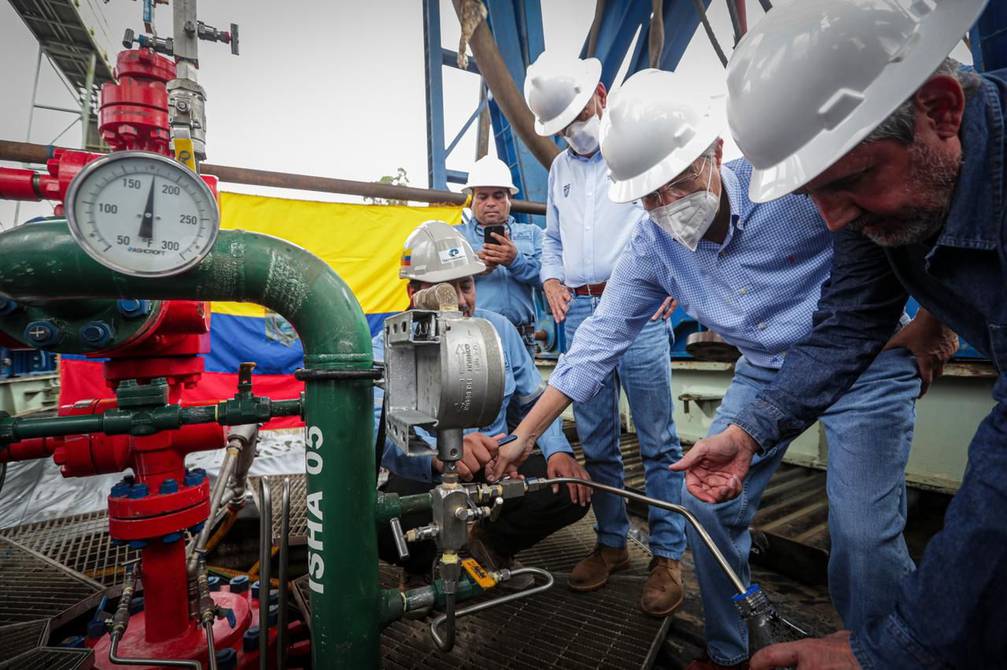 President Guillermo Lasso opened this April 13, 2022 the valve of well A5 of the Ishpingo field, located in the Amazon.

The opening of this first well was in charge of the President of the Republic, Guillermo Lasso, and the authorities of the Ministry of Energy and Mines and Petroecuador, and is part of the Government’s goal of doubling the country’s oil production.

“The sample tells us that this well, as of today, will produce 3,600 barrels of oil per day. The annual production of this well will be 1,300,000 barrels, at current prices they mean more or less $90 million a year,” the president said on his WhatsApp network.

There are 36 wells on platform A that will go into production until the end of the year.

“This is the Ecuador to which we must dedicate time and effort. Here are the resources to finance the program to combat chronic child malnutrition, the reconstruction of classrooms in schools and colleges, improve health services and other strategic projects for the well-being of the Ecuadorian family,” added Lasso.

The manager of Petroecuador, Ítalo Cedeño, pointed out that the crude will be extracted from the U and M1 reservoirs, whose quality is 14.5 degrees API, which corresponds to heavy crude. He added that it is a directional well, whose drilling reached a depth of 7,795 feet and that 36 wells are planned to be drilled on that platform.

While the president stressed that this platform is operated with Ecuadorian labor. Staff from the area, surrounding communities and a multidisciplinary team of specialists in oil production work within the ITT, it is detailed in a statement from the General Secretariat of Communication of the Presidency.

Petroecuador has previously indicated that it expects to double its hydrocarbon production by 2026 to just over 800,000 barrels a day.

The Ishpingo field, part of block 43 of the ITT, is located in the Yasuní National Park area, one of the most biodiverse areas in the world. The oil authorities have guaranteed on several occasions that Yasuní will be respected, and the best technology will be used to take advantage of the enormous potential of Ishpingo, which is greater than that of Tiputini and Tambococha combined. (I)

South Africa supplies Ecuador with a variety of bananas, tolerant to fusarium