Five companies interested in 4 oil fields that are part of Oil & Gas, promoted by Petroamazonas 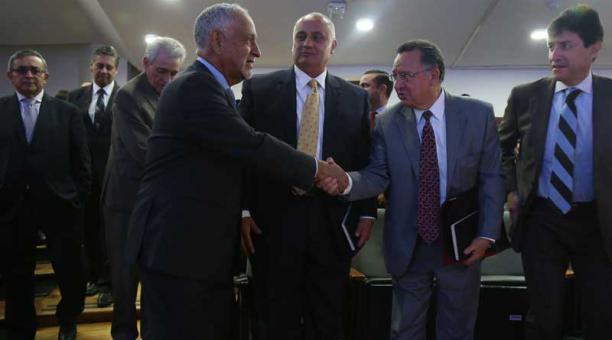 The four oil fields that are part of the Oil & Gas round, promoted by the public company Petroamazonas since last March, attracted the interest of five companies.

During the opening of envelopes that took place yesterday (Tuesday May 29, 2018) in the Hemicycle of the National Polytechnic School, in Quito, the proposals presented by firms from Venezuela (two), Mexico, Russia and Ecuador were detailed.

These propose an investment of around USD 750 million for this sector. In total, these companies presented yesterday (Tuesday May 29, 2018) eight technical and economic offers for the Cuyabeno-Sansahuari, Oso, Yuralpa and Blanca-Vinita oil fields, which are located in the provinces of Sucumbíos, Napo and Orellana.

In these areas, the current oil production totals 36,638 barrels of oil per day. Carlos Pérez, Minister of Hydrocarbons and Electricity, informed that the offers are positive, because additional investment will enter the country.

The proposals state that the State pays the firms rates for each barrel extracted between USD 12.64 and 26.18. Álex Galárraga, general manager of Petroamazonas, explained that these rates coincide with the offers received for the previous process of minor fields, which was awarded last February.

The amounts are set according to the cost of the West Texas Intermediate (WTI) crude, which serves as a benchmark to set the value of Ecuadorian crude. In these processes a benchmark price of around USD 55 per barrel was considered during the term of the contracts (10 years).

Taken into account these factors, the average rate that Petroamazonas will pay to the companies that are favored will be around USD 14 or 15 per barrel, said Galárraga. “This (rate) can go up or down depending on the price of the WTI.”

The offers presented also propose an increase in production for the Cuyabeno-Sansahuari, Oso, Yuralpa and Blanca-Vinita oil fields of 69.11 million barrels of oil for the next 10 years, which is the term of the contract, once the offers are evaluated and the field is awarded. After the opening of envelopes, the commission in charge of carrying out this process will evaluate the offers within a period of one month.

The Government expects the contracts to be awarded to the winning firms at the end of June. In the case of oil fields, it is expected that contracts will be signed under the modality of providing specific services with financing from the contractor.

The firms will be responsible for drilling and completing wells, reactivating closed wells and building facilities (facilities). With respect to the Amistad natural gas field, which is part of the Oil & Gas round, the technical and economic offers are expected to be opened in the coming weeks. Because this operation will be done outside the land surface, the investors requested an extension to complete their offers. For this activity, equipment different from those used in the Amazon is required.

The Amistad natural gas field is located in the Gulf of Guayaquil, 65 kilometers from Puerto Bolívar, in El Oro. In this area, 4 957 equivalent barrels of natural gas are produced. But the goal is to increase production to meet the demand of the coming months.

By October of this year, the demand for this derivative will be 89 million cubic feet per day to generate energy and for the industrial sector. But, currently, the country is able to deliver only 34.5 million, according to yesterday’s report from Petroamazonas.

To increase production, it is expected to use a different modality from the oil fields. The proposal is to sign a service contract with financing. That is, the firms must present their offers to increase production in Amistad, and if it is profitable, the field will be awarded. To achieve this goal, around USD 100 million is required. The government expects the cost of drilling each well to be less than USD 15 million, otherwise it will seek to import this derivative from Peru, the state oil company reported. (I)

Three groups monopolize the frequencies of radio and TV, according to the Comptroller