Five People Died in the Philippines 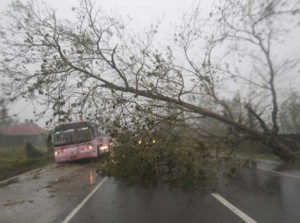 Approximately five people passed away today in Philippines due to the “Megi” typhoon—which went through Isabela province and the north of Luzon island—and its strong winds (225 km per hour).  Infrastructures and crops have also been damaged; the Government has declared the affected zone catastrophic.

Because of the increasing river flow, two victims drowned to death; another one was struck by a lightning and the other two people died after being hit by fallen trees.

Ten typhoons have passed by Philippines this year, but “Megi” is the strongest one to date. The center of Tropical Storm Watch categorized “Megi” in the level five; this means it’s a super typhoon. At the moment, the country has no communication and no electricity; most of the rice harvest is spoiled, many flights have been cancelled and more than 3000 people have been forced to evacuate Cagayan and Isabela.

“There could be massive destructions there (Isabela),” said Benito Ramos, Executive Director of the National Agency of Disasters. “The electricity has been suspended, crops that were about to harvest could have been spoiled. We don’t have any current report because we’re waiting for the rain to stop in order to order evacuation.”

Sources informed “Megi” has lost strength during the recent hours; it is now in level four. This is the first time a level four alert has been declared.