The Foreign Minister, Luis Gallegos , and the Commander of the Navy, Edwin Pinto, appeared today, Monday, August 17, 2020, via telematics before the International Relations Commission, where the presence of foreign ships near Galapagos is being investigated . 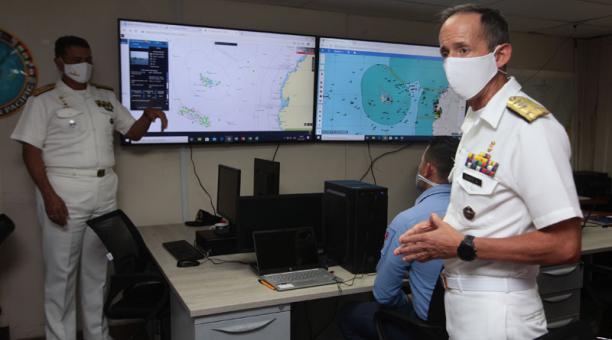 Pinto commented that this year there are records of up to 320 vessels of this type dedicated, above all, to fishing for giant squid , at a distance of up to nine nautical miles from the exclusive economic zone.

He assured that two of them were detected within that insular space “making use of the innocent passage”, that is, the free transit to which all vessels are entitled , without this implying any exploratory or fishing activity.

“These vessels had an erratic behavior within their normal trajectory; These vessels were registered and it was determined that they had a machine problem and that what they were doing was innocent traffic at a reduced speed . None of them were fishing vessels, ”he said.

For his part, Foreign Minister Gallegos said that Ecuador has asked China to extend a moratorium on its ships from June of each year and not only from September to November, to which the Asian giant had committed.

“We have also asked that through the efforts of the RFMO-Pacific region, has in observers boats hundred percent of ships, prohibition of transshipment cargo , banning refueling of fuel and implementation of vedas and fishing quotas in the waters close to the exclusive economic zone ”, he added.

Gallegos did not rule out that the country can sue if it is determined that the bottles of plastic and other objects that reach the islands come from these boats.

The Commission also planned to receive the appearance of the United Nations resident coordinator of Ecuador today, but he excused himself. While the Chinese ambassador in Quito did not send any excuse for his absence at the invitation of the parliamentary table.

Also attended Luigi Benincasa, principal of the Association of Tuna of the Ecuador (ATUNEC) who disagreed with that there are sectors seeking the extension of the Galapagos Marine Reserve more than 40 miles, it said this would harm the guild.