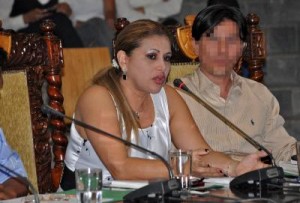 The former Deputy Mayor of Santo Domingo Eunice Esther Arce Moncayo, was arrested on June 13 when arriving to the Miami airport. Eunice was in possession of $ 14,780 in cash and gold bullions in her luggage, which are worth more than $ 110,000, undeclared in the customs office, according to The New Herald newspaper. A federal judge granted her bail, but she has not yet been arraigned.

Arce said in her Facebook account that she had forgotten to declare her jewelry in the U.S. Customs. “I have not committed any crime”, she said.

The criminal complaint filed in the federal court of Miami by a special agent of Homeland Security Investigations (HSI), notes that Arce recognizes that the gold taken out of Ecuador was carried in her luggage, like the dollars, but added that all would have been ​​her daughter´s idea, who, according to her, would have melted the gold bullions and placed them in the center of each of the two plates her mother described as recognition awards of her work in Ecuador when arriving to the airport, according to the criminal complaint.

During the questioning, Arce also accepted to carry more than $ 10,000, despite what she claimed in her customs declaration, says the criminal complaint .