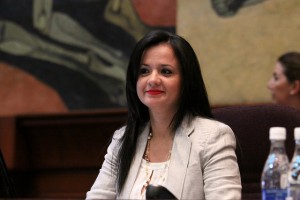 Marcela Aguinaga, second vice president of the Assembly, defended yesterday in two public statements, her performance in the purchase of 66 plots of land to the Institute of Social Security of the Armed Forces (ISSFA) in 2010, when she was environment minister.

According to the President´s office and the Attorney General´s office, there was an “excess” of $ 41 million in the payment of that ministry to the military insitution.

In the first letter, addressed to the media, Aguinaga justified the decision to purchase these lands to increase green areas in Guayaquil.

She assured that the negotiations between these institutions were held “in accordance with law, where no money was paid to any private person or insitution.”

In another letter, addressed to the public, she recalled she spent “many hours” to boost the Samanes project and worked with “transparency.”

She says she will wait for the results of the special examination that will be conducted by the Comptroller General´s office for this acquisition, to later take a decision.