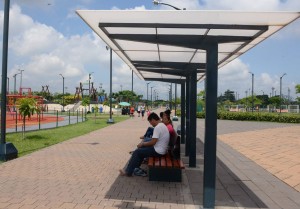 The Comptroller´s office found in 2015 eight legal breaches in the construction project of the Samanes Park in Guayaquil, which is now the subject of another control action by the agency.

That year the institution conducted a special engineering review to seven work contracts as part of its annual plan, and this will review an `unforeseen´contract to the sale of lands the Ecuadorian Institute of Social Security of the Armed Forces (ISSFA) negotiated with the Ministry of Environment.

The Government contends there was an ‘excess’ payment of $ 41 million in favor of the ISSFA and therefore ordered an offset of accounts between the Institute and the State.

The decision, adopted on Thursday, angered the military leadership which by its public stance, was replaced by President Rafael Correa.

Remittances from Ecuador increased by 46.03%