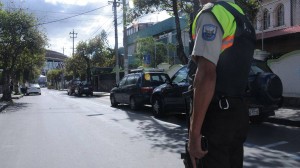 The French Embassy and the French Alliance, French institutions in Ecuador, are on a permanent police protection after the attacks of Paris recorded last Friday, in which 129 people died.

The side streets of access to these institutions are closed one block away, and police patrols monitor and control these sectors to provide security to the authorities of European countries and their citizens residing in Ecuador.

Hellem Bekker, director of the French Alliance in Quito, said they have asked the security company of the institution to be vigilant with people entering the place.

The French ambassador to Ecuador, Francois Gauthier, said that the French community should be calm in Ecuador. He thanked the action of Ecuador for its solidarity, its sense of brotherhood in a very difficult time, the reported the Ecuavisa news program.