BREAKING NEWS
With a goal of $ 5 million in business expectations, the Ecuador Food Fair virtual fair started
Corn harvest continues amid pandemic
Companies cut working hours in half due to crisis in Ecuador
Petroecuador will make new sale of oil in the spot market
More than 10,000 entrepreneurs and SMEs are grouped together on digital platforms in Ecuador
Shrimp industry drives isolated growth in imports
Diana Atamaint, on the ropes
Film competition seeks to leave the memories of the pandemic
The hass avocado grown in Santa Elena will be exported to the European Union
Trade agreement with EFTA opens a market of 12.5 million inhabitants

Fumigations cause effects in the border according to the CIF 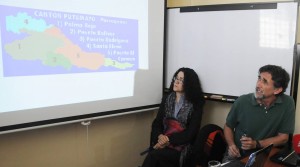 The Inter-Institutional Committee organization against Fumigation said yesterday that the agreement between Ecuador and Colombia, signed in September 2013, would not be met. The non-governmental organization said that distances from one to five kilometers would have been sprayed with glyphosate, when it should have been not less than five kilometers. Laboratory tests and physical disorders among the inhabitants of the northern border would prove that glyphosate spraying to exterminate the cultivation of coca would be causing effects again.

Testimonials of inhabitants of La Providencia population indicate that between 28 and 31 October “white aircrafts were expelling from a stream like a white cloud,” said Adolfo Maldonado, a member of the organization.

Yesterday, a report from the German laboratory Eurofins Global Control was submitted, which details the presence of a sample of 5-enolpyruvylshikimate-3-phosphate (compound of glyphosate), present in leaves of Amazon plants, with a composition of 0.01 milligrams and 0.15 milligrams of glyphosate.

The analysis was conducted between the 8 and 17 of December and indicated that from 160 people living in the Colombia-Ecuador border, 106 would have suffered some type of health problem.