BREAKING NEWS
Ecuador requires a visa to 23 countries; between them of India and Camerum they stay more
Domingo Cavallo and George Selgin highlighted the 20 years of dollarization
The filmmaker Paúl Venegas portrays the Chinese migration in his film ‘Empty’
The local shrimp consolidates its hegemony in the Asian market
Lenín Moreno lobbies in Davos, Switzerland, by Schengen visa
Ecuador and countries in the region take measures against an outbreak of coronavirus
Ecuador works on policies to welcome Venezuelans
Gastromixology, the technique that advances in Ecuador
The obstacles that the European Union puts on Ecuador’s exports
Ecuador promotes its tourist and gastronomic wealth in the markets of Madrid

Funds for the earthquake were used for bridge and Mataje road 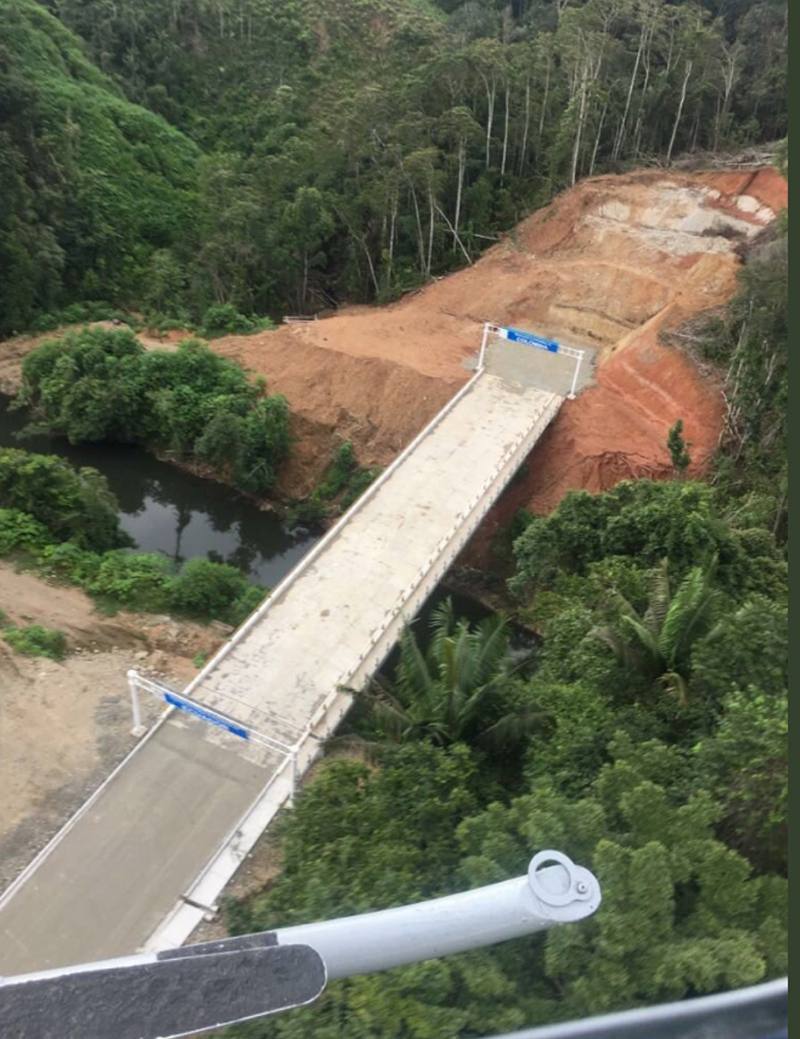 In the middle of the border line, heading north, the international bridge over the Mataje River is not going anywhere. Under the sign with blue background that says “Welcome to the Republic of Colombia” the asphalt ends abruptly and the Colombian mountain begins. The welcome rather gives a hot hill, jungle vegetation, a few minutes walk inland merges with coca plantations and territories dominated by a dozen bands of criminals and dissidents of the FARC in the service of drug traffickers.

The bridge is at the north end of a paved detour that starts 18.1 kilometers before, at the so-called Y de Mataje, on the main road that goes from Ibarra (Imbabura) to San Lorenzo (Esmeraldas).

Before it was a path of stones and earth; however, since June of last year it is a first class road, with signage, ditches, drainage, sewers and fillings, which cost, including the bridge of 68.3 meters in length and 10.7 in width, $ 12.9 millions.

The contract for the reconstruction of this road and the lifting of the bridge was signed on August 11, 2016 by Omar Chamorro, delegate of the Ministry of Public Works (MTOP), and Santiago Báez, of the Rio Mataje Consortium. The control was in charge of the company Río Esmeraldas.

In the seventh clause of the contract, whose copy rests in the Third Notary of the Ibarra canton, it is indicated that the MTOP, through the Zonal Undersecretary 1 and the Provincial Directorate of Esmeraldas, “will pay the Rio Mataje Consortium the value of this contract with resources from the Organic Law of Solidarity and Citizen Co-responsibility for the reconstruction of the areas affected by the earthquake of April (2016) “.

Although Esmeraldas was one of the provinces declared in emergency, even with a state of emergency, to streamline the transfer of funds in the aftermath of the earthquake, the San Lorenzo and Mataje areas did not present major damages or emergencies compared to border towns with Manabí, like Chamanga and Muisne, where a large part of their infrastructure and the basic services system collapsed.

The Organic Law of Solidarity was applied since June 2016 and established a series of special contributions charged to the account of citizens and businesses, in order to finance the reconstruction. Among them were items that were applied on remuneration, assets, profits and real estate.

In the contract, the payment model for the Rio Mataje Consortium was determined in this way: an advance of 40% ($ 5.7 million) with three-year government bonds, another 40% with fiscal resources of 2016 and 20 % remaining charged to the 2017 budget.

During the government of Rafael Correa, this bridge was highlighted as the third of the border integration, which would be added to that of Rumichaca, in Carchi, and to the one that crosses the San Miguel river, in Sucumbíos.

The representatives of the farmers and peasants applauded the idea. The MTOP bulletins state that some 22,000 inhabitants dedicated to livestock, fishing and agricultural production could finally transport and market their products under better conditions. However, in practice, the infrastructure raised did not fully achieve that objective.

The commitment, assumed even by the Colombian president, Juan Manuel Santos, was that the project would be complemented with a section that connects it with the population of Espriella, in Colombia, but did not advance in the agreed terms. On the Ecuadorian side, the work took less than a year, with funds for the reconstruction of the earthquake.

In the contract, at least three executive decrees of 2016, subscribed by former President Rafael Correa, are cited as background, as justification for the transfer of resources.

The then ministers of Economy, Fausto Herrera, and of Public Works, Walter Solís, also signed agreements to qualify the urgency of the project. (I)

Domingo Cavallo and George Selgin highlighted the 20 years of dollarization