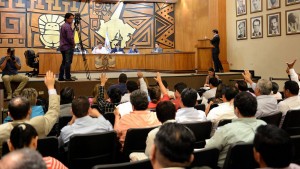 Prefect Jimmy Jairala estimated yesterday that in 2016 the provincial government will dispense with $ 15’000.000 due to state budget cuts. However, he noted that by the mid of next year the Ministry of Finance would pronounce on that amount, according to the price trend of the barrel of oil, he said.

Jairala chaired the Council meeting in which the 2016 budget, estimated at $ 278’000.000, was approved, and which is the same amount as the current year. It was a decision in the first debate, supported by a quorum of 23 directors, including those who were mayors of the province. The deadline for the final approval will conclude on Thursday 10, according to the prefect.

Among the mayors who attended the meeting are: Francisco Leon, of Salitre; Luis Palma, of Palestina; Miguel Solorzano, of Santa Lucia; Lenin Valle, of El Empalme; Alexandra Arce, of Duran; Marcos Onofre, of Naranjito; Andres Macias, of El Triunfo; Jose Miranda, of Bucay; Rita Muñoz, of Isidro Ayora, among others who arrived before 10:00, when the Council session was installed.

Daniel Saab, Councilman of Samborondon, and some presidents of parish boards, appointed as counselors like Jaime Aragones, Mayor of El Morro, were also present.

Medicines for terrible illnesses: difficult to get