G77 + China Summit will not be attended by Correa 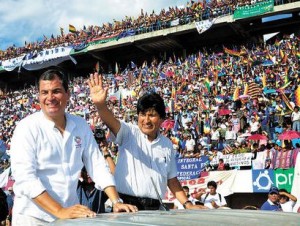 President Rafael Correa will not participate in the deliberations of the G77 + China summit scheduled for June 15 in Santa Cruz (Bolivia).

“The problem is that on June 15 (Sunday) is the Father’s Day in Ecuador. So it will be very complicated, as i’m a father, the chancellor (Ricardo Patiño) has just become grandfather, ” said the President in a meeting with the press.

Correa said that Ecuador’s position in the summit is part of the “need for a global collective area to defend ourselves from the capital empire and the hegemonic vision of certain countries, also dominated by the capital”.

But he said he will be in Bolivia on 13 and 14 June, where he plans to participate in a meeting convened by Bolivian indigenous and labor organizations.