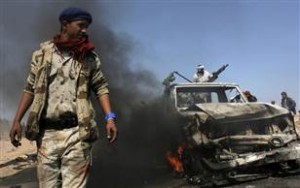 The International Penal Code (CPI) has proofs that the government of Muammar al Gaddafi planned to crush the demonstrations by killing civilians before there was an uprising in Libya. The Argentinean district attorney, Luis Moreno Ocampo, revealed this yesterday.

The demonstrations in Libya began in February 15, later they turned into a civil war after the forces of Gaddafi fired upon the protestors. However, the uprising in the west Libya left the eastern city of Misrata under the hands of the rebels. The Security Council of the United Nations, approved on March 17, airstrikes against the government of Libya to prevent any further killings in the country.

Luis Moreno must present his report to the United Nations on May 4, it is expect that he requests arrest warrants on charges of war crimes. Moreno stated that shooting against civilians was a predetermined plan. Meanwhile, the diplomatic efforts to end with the conflict have failed. The government has offered concessions, but insists that Gaddafi remains in power. On the other hand the rebels are not backing down on their demand of Gaddafi’s resignation. The heated hostilities continue in the oil port of Brega.

Japan will not Attend the Copa America 2011