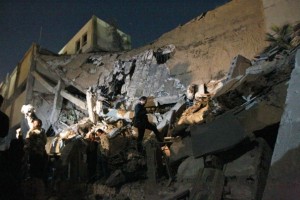 The building was hit because it contained command and control capabilities. Meanwhile several supporters of Gadhafi rallied outside the destroyed facility with banners expressing their contempt to the world leaders. It is unknown if Gadhafi was still living there when the impact occurred.

The Libyan leader has not appeared in public since the U.N. Security Council voted Thursday for the authorization for the use of force. After this resolution, Gadhafi made a radio disclosure from an unknown location, in which he warned that the Western and Arab nations rallied against him would face “a long war.”

Lybian state media informed that more than 50 people have perished during last weekend’s allied strikes. This altercation has fueled the rage of Gadhafi supporters, the city remains paralyzed, the shops are closed and the streets are filled with black smoke and infighting. (AV)