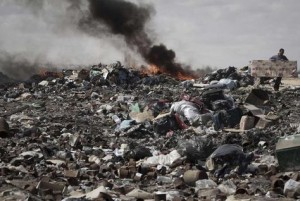 Forces loyal to Coronel Muammar al Gaddafi attacked two Libyan towns in Tuesday after the third nights of air raids on Tripoli. The anti-Gaddafi rebels struggle to create a command structure to provide support to the air attacks against tanks and air defenses. Several western nations have not decided who will run the operation once Washington pulls back.

President Barack Obama informed that in the upcoming days Washington would relent his air assault, speculations dwindle about who will take the torch of the attacks. The transition will be made in the following days, since Obama is facing inquiries at home about the US military getting bogged for its participation in a third Muslim country.

During the night a F-15E US Air Force crashed in Libya, one of the pilots had been recovered, while the other is “in the process of recovery.” The plane crashed do to a mechanical malfunction and not because hostile fire. The latest news of Al Jazeera informed that Gaddafi forces shelled with their tanks the rebel held western city of Misrata, during the attack the casualties included four children. On Monday the total death toll reached 40 people.

National Brewery Has Until Midnight to Cancel its Debt