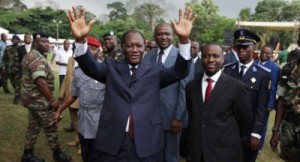 Defiant as ever, Laurent Gbagbo remains hidden in his bunker, while the United Nations stated that he should seize his last opportunity for a graceful exit. Almost 200 men protect Gbagbo residence in Abidjan, while the city is filled with crossfire between Gbagbo forces and the army loyal to the newly elected president Alassane Ouattara.

U.N. Secretary-General Ban Ki-moon stated that Gbagbo should leave his office since he has to care about the welfare of his people. However, Gbagbo showed no signs of surrendering. While the military fight each other, civilians looted the house of the Japanese ambassador as well as several embassies; like the French embassy, according to the information given by Colonel Thierry Burkhard, spokesman for the French Defense Ministry.

Meanwhile the fighting between Gbagbo an Ouattara continues, it has passed over a week since Ouattara’s forces entered Abidjan. This Thursday the operation labeled as the “final assault” to get to Gbagbo failed. Officials of both sides have informed that the negotiations of a surrender for Gbagbo fail because of his defiant position. The African Union spokesman, Noureddine Mezni, said that several African Nations are offering the beleaguered leader a “safe retreat,” however he did not mention where.