Geneva Agreements have been violated by Kiev according to Lavrov 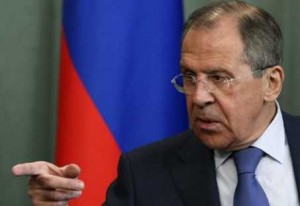 The Minister of Foreign Affairs of Russia, Sergey Lavrov, this Monday accused the Kiev government of reneging on agreements reached in Geneva last week in order to restore the Ukrainian crisis.

Among the measures agreed in Geneva to stabilize the situation in Ukraine, the disarmament of militias and the eviction of establishments occupied by protesters are included.

Lavrov accused the Kiev government of brutally violating the Geneva Accords, referring to Sunday’s clash in the city of Slaviansk, to which he said, `it exceeded all limits´, and he  denounced the arrest of pro-Russian activists in several cities of southeast of the country, despite the amnesty announced.

`One of the points of the Geneva agreement calls for amnesty for political prisoners and people who participated in the protests. However, instead of releasing the detainees, especially the popular governor of Donetsk, Pavel Gubarev, the Kiev authorities are still arresting political activists from the southeast,´ Lavrov said.