Giant tortoises will be released in Galapagos 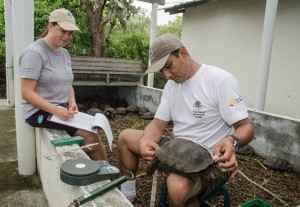 The GNP together with Galapagos Conservancy, release the turtles of the species

like the extinct Santa Fe , to establish ” a population of breeding fulfill their role in the ecosystem “.

The young turtles to be released in Santa Fe have between 4 and 10 years old , and have been bred in captivity in the ” Fausto Llerena ” Downtown

Santa Cruz . Forty have a GPS to find their routes , movement and activities the GNP said in a statement .