Goal of Ecuadorian player is highlighted in international media 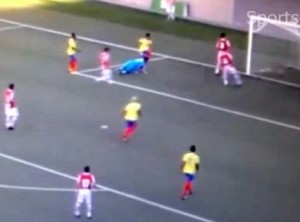 The daily Marca of Spain and El Comercio from Peru have highlighted the goal of Fabian Tello in the Ecuador’s victory against Paraguay 2-1 at the South American Games in Chile.

The media praised the goal that marked the tricolor player of 15 years who plays in the formative divisions of Club Independiente José Terán, which has been compared with the annotations of Cristiano Ronaldo and Lionel Messi.

¿Is the best goal in the history?, asks daily Marca, in its digital version. “He scored a anthology goal in the Ecuador-Paraguay match of the South American Games which take place in Chile. A picture is worth a thousand words, “explained the Spanish portal.

El Comercio journal from Peru, in its multimedia section, said: “Ecuador already dreams of seeing the major selection. It is called Fabian Tello, plays in the Under 16, and broke through the Odesur Games with a goal to the point that it is now compared to Lionel Messi. ”