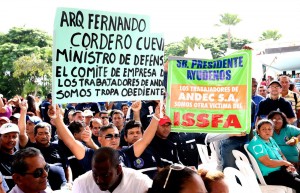 The board of Andec, a metallurgical company whose shares are mostly owned by the Institute of Social Security of the Armed Forces (ISSFA), will meet this week with top executives to demand an accounting of its management.

Defense Minister Fernando Cordero said days ago that this decision was made based on allegations of employees of the company; even a group of them was present in the weekly address of February 13 expressing support for the government´s decision of debiting $ 41 million from the ISSFA accounts for the alleged “excess” payment of some lands where the Samanes Park is currently located.

The board of Andec is made up of delegates from the Coordinating Ministries of Production and Industries, the ISSFA director and the head of the Joint Command of the Armed Forces.