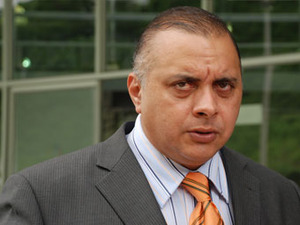 The lawyers of Ecuadorian former assembly member, Galo Lara, are analyzing legal strategy to be used when the Government of Panama granted his client territorial asylum, because he claimed that he is a persecuted politician in Ecuador.

Pedro Granja, one of the lawyers, said that “From the inside” have not yet decided if it should go to the next diligence in the processing of the sentence that Lara received, it is the audience for the appeal.

Granja indicated that the Supreme Court of Justice have not yet set time and date for the hearing, but he estimates that will be in ten days maximum.

The Criminal Hall of the Supreme Court of Justice (NCJ for its spanish acronym) sentenced Lara to ten years in prison for being a suspected accomplice in the triple murder, which took place in Quinsaloma, province of Los Ríos, in August 2011.

The Government of Panama granted protection to the former assembly member because if he returns to Ecuador his life is in danger.

Panamanian President Ricardo Martinelli signed the document last October 22. Haven governed from Friday October 25, when it was published in the Official Gazette.

With regards to the asylum granted, President Rafael Correa questioned the next day the decision of Martinelli. “What a shame! Our solidarity with the Panamanian people of having a dangerous offender hanging around on the streets”, said the President during the broadcast of last Saturday.