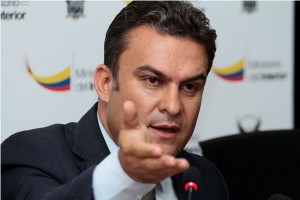 The Interior Minister Jose Serrano denied that acts of aggression and torture have been carried out to youths arrested in the demosntrations of September 17 and 18. These statements were made ​​in response to the report of Human Rights Watch (HRW), which ensures that the police used excessive force to disperse mostly peaceful demonstrations in Quito those days “during which they arbitrarily detained and beat protesters”.

He added that the report is not a surprise “given that there are people like Mr. (Jose Miguel) Vivanco, who in one way or another is nothing but a systematic way to attack the country”.

Serrano said that the report only considers the perspective of students, when videos show, he said, “we can prove that members of the police were attacked by students”.

Serrano noted that so far any valid report setting suspicion of any violation of rights or torture has been exposed.