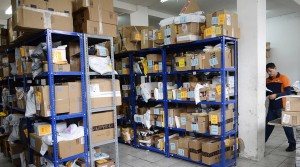 Migrants should present the consular card to avoid the cost of the $ 42  fee that will be charged for shipments of the 4×4 system (up to $ 400 and up to 4 kilos).

117 thousand (30%) of the affected with this new standard are people who buy through internet and 270 thousand (70%) are migrants, said Esteban Melo, Assemblyman from Alianza PAIS (AP), who said that the figure was obtained by extracting data from the Ministries of Industry and Commerce.

The new reform will take effect on October 8. The options that were raised in recent days to avoid this charge for migrants were presenting the consular identification or voter registration.

President Rafael Correa dismissed the electoral registration requirement, since he said it is not an obligation to vote abroad.

The idea, according to Correa, is that with “the consular registration, with the consular card” migrants are allowed to “continue sending their shipments” without canceling the tariff.

Last week Jorge Rosales, General Director for Operations of the National Customs Service of Ecuador (Senae), noted that “at the moment (…) it has being decided to start with the issue of the voter registration …” and in the future it could also include the consular identification.