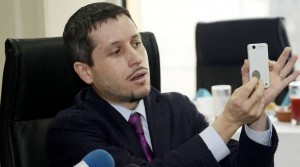 The Manager of the Central Bank of Ecuador (BCE for its Spanish acronym), Mateo Villalba, performed on August 17 a payment of $ 3 with electronic money to an official of the same agency. This was the first electronic currency transaction.

The system was presented at the Campus Party, held at Cemexpo, Quito. But the authorities clarified that the payment was only a demonstration of how the system will be operational later this year.

The electronic currency will be a voluntary payment mean that will use cellphones for the purchase of goods in supermarkets, drugstores, supermarkets, etc. The support will be in dollars, that is, if a person has $ 1, he/she may exchange it for an electronic equal.

In the query of whether salaries are paid with electronic money, Villalba said “no, the system is not added to that.”