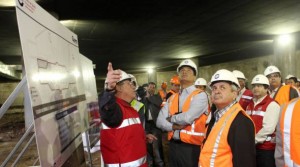 President Rafael Correa said that the government will keep funding the subway of Quito and the tram of Cuenca. This clarification was made after mentioning in last weekly address that those were some of the projects that do not correspond to the regime.

The President noted on Saturday the intention of possible amendments to the Code of Land Management (COOTAD) so that autonomous decentralized governments can collect tax rates to finance.

The mayor of Quito, Mauricio Rodas, said that the Subway funding was a commitment for the city and not for any municipality. The mayor said he has not spoken with the Government on the issue, but insisted that there is a public commitment of the regime with Quito. “We hope this commitment is fulfilled,” he said.