Government will reduce contributions to the municipalities 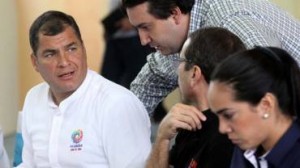 President Rafael Correa announced that his Government will not fund municipal competences, so subsidies that are given to Autonomous Decentralized Governments (GAD for its Spanish acronym) will be reviewed.

“If a municipality needs more money for its competitions, these shall raise taxes to finance itself” said the President regarding the reform that will deliver municipal competences, instruments, the rate and cost of services.

Correa insisted that the Central Government has its own obligations, while GAD receive $ 270 million dollars in additional transfers.

He said that assignments to regional Governments have increased since 2006 and exceeds more than $ 3.198 million dollars.

“We don’t even have money for us and we  subsidize competences  that are not ours (…). there is a total of $ 720 million dollars in additional transfers, this is more than the required by the law … “.

Correa calculated that with this amount about 180 schools of the millennium would be built.