The country’s stock market moved USD 11 796 million in 2019; This is an increase of 58% in relation to the amounts traded in 2018, according to data from the Quito Stock Exchange (BVQ). 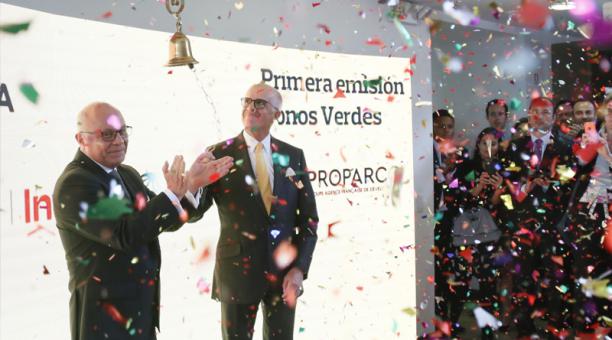 The amount traded on the Exchange in 2019 represents 10.4% of Ecuadorian GDP and is the highest figure in the last 10 years.

This better stock market performance is mainly explained because the State had a more active participation through the issuance of treasury certificates ( Cetes ).

The Cetes are papers issued by the Ministry of Finance to obtain resources to finance the budget in terms of less than 359 days.

“This instrument is taking the same dynamism it had during the previous government, to solve short-term needs such as payment of payroll services , building maintenance, and even salaries,” said Gonzalo Cucalón , manager of the Banrío securities house.

Until July of last year, the Treasury had already obtained USD 2 876 million through these papers that mainly attract investors such as banks and cooperatives .

According to the BVQ, in March the highest amount of Cetes was placed, for USD 1,131 million. In that month, the Government signed a financing agreement with the International Monetary Fund (IMF).

2019 was also marked by a greater market share of the Bank of the Social Security Institute (Biess). Last year, the entity invested USD 929.8 million in the Exchange. Most of the investments -61% – went to the financial sector, but also to government bonds and the real sector; that is, to instruments issued by companies to be financed.

Fernando Simó, president of the Association of Securities Houses of Ecuador ( Asocaval ), stressed that it is a much higher share than that registered in 2018, when Biess investments were USD 24.5 million.

However, Simó stressed that the bank could invest more, if it were established as a policy to invest a minimum percentage of its portfolio in instruments of this market .

The participation of private banks also boosted the growth of the stock market. The amount of negotiated investment certificates doubled in 2019 and deposit certificates were the second instrument with the highest participation in the Exchange. However, transactions with this paper had a slight reduction over the past year.

Simó said that the banking sector also marked a milestone in 2019, with the first green bond issue made in the country, for USD 150 million. This operation was carried out by Banco Pichincha , last December.

The entity informed that it will allocate these resources to loans, mainly to those of the ‘Bio’ line, for the financing of renewable energy projects , energy efficiency, clean production, agriculture, waste management.

Santiago Cornejo , president of Probrokers Casa de Valore, said that although 2019 was a year with less economic dynamism, negotiations in the non-financial sector grew by USD 496 million. One of those papers with better performance are commercial invoices, which grew 39% compared to 2018. In 2019 USD 377 million were negotiated with this type of paper, meanwhile, in 2016 the amount was USD 2.6 million .

It is an instrument that allows companies to sell investors the right to collect invoices. Those who negotiate their invoices receive cash at a discount , but avoid waiting months to receive the invoiced amount.

For Gilberto Pazmiño , president of the BVQ, 2020 will be a year of challenges, because legal changes are awaited.

“We hope that the State will concrete the offer to send the bill of integral reform for the stock market, to strengthen the operation of this market , attract foreign investment , allow greater stock market inclusion,” he said.