Groups get ready for the march of May 1st 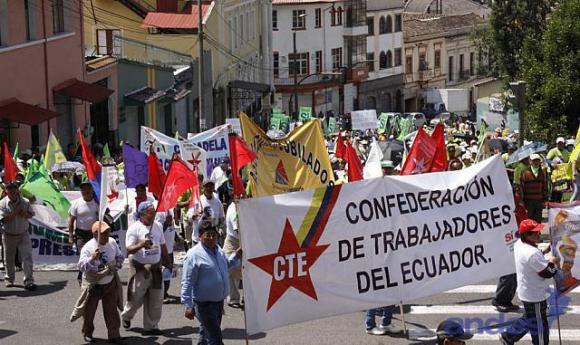 Government supporters and social groups expect to make a tour through Portoviejo Sunday morning to thank the work of rescue workers, volunteers, physicians and individuals who have helped the victims of the 7.8M earthquake.

They also expect to deliver a floral tribute to remember the 659 victims.

Likewise, the United Workers Front (FUT) has called for an arts festival in La Alameda Park.

The activity will begin at 08:30 with the participation of Ecuadorian artists who will collaborate to collect food, gallons of water, among other donations.

Pablo Serrano, president of the FUT, said that the working day of the working class will be marked this year by the collection of food and supplies for those affected, as the needs will remain for months.

The march, which will be replicated in Guayaquil and Ambato, will also protest against the tax increase approved last Tuesday. “Instead of congratulating the people for their supportive attitude, the government punishes it and forces it to pay more taxes,” criticized Edwin Bedoya, vice president of Cedocut.

Among the alternatives to face the crisis, the FUT proposed an auction of government media; the renegotiation of oil contracts; the suppression of ministries, secretaries and undersecretaries.

As well as salary reductions in the public sector, “according to analysts, the country would save more than $ 700 million, since there´s a group of 40 thousand employees earning between $ 5,000 and $ 8,000 monthly. This, in a country in crisis, is simply criminal,” Bedoya said.